A difficult can to open: Upholstery on a budget

At my job, I needed to know how to do a little upholstery but I didn't know how - so to rectify that problem I ordered some tools and a DVD to teach me how to do the more complicated upholstery stuff.  I was determined to teach myself to upholster. I am a pretty good sewer to start so I had a good grasp on making pillows and piping but I had never applied it to furniture before. I had a couch that badly needed to be redone and so I began on my first upholstery journey.
I watched the DVD and even though the teacher had poor taste in fabric and was drier than a desert, I managed to glean enough to think I could attempt to reupholster my own couch. I can tell you right now, that my first mistake was starting with such a big project.  Having never reupholstered before I had no idea what I was getting myself into. 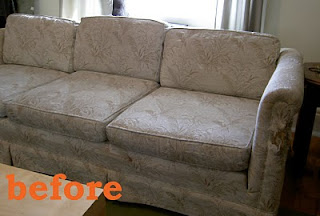 Finding the fabric to do such a large piece like this turned out to be a challenge. To do this couch I needed a whole heck of a lot of fabric which can cost a lot of money - money I didn't really have! I went everywhere I could think of to find cheap fabric. I learned that a huge complication with cheap fabric is that it's difficult to find large quantities without any problems in it. I didn't find anything at Fabricland for exactly that reason and they didn't carry rolls long enough for me to complete the project. I had to go to Toronto, to Designer Fabrics, in order to get what I needed.  I ended up with a $7/yard green soft wash denim, that was hardy enough for upholstery but was pretty on the eyes and soft to the touch.  I also purchased other cheap fabric for the inside parts that was strong but also pretty just in case it was seen.
I then began the grunt work: taking the couch apart.  I really believe that the hardest part with reupholstering is taking the old fabric off. Well made pieces of upholstery often have about a million staples in them.  Those commercial upholsterers do not joke around. They don't take any chances and so they staple and staple some more until there are piles of wasted staples on top of wasted staples. It's a bit ridiculous.  Taking this couch apart took me a week merely because getting staples out of hardwood is difficult and by the end of each day my hands were red and swollen.   Putting the couch back together took a lot less time - about 3 days.  I had taken photographs of each step of the couch and copious notes on how it was put together so that I could properly put the new fabric on in the correct order. I had been told more than once not to use the fabric I took off of the old couch as a pattern pieces for the new couch.  This is because fabric stretches and a lot of fabric gets trimmed off of the couch once it has been stapled. As well,  you often need extra fabric to hold onto while you are stapling on the new pieces. I added an extra 2 - 3 inches on to my pattern pieces to allow for this.

When I began this couch I wanted to do something really funky but found that my pocket book could not afford the really pretty fabrics that would have accomplished that easily. Instead I chose to use a darker green piping to give the couch a more updated look. It's still pretty conservative for me, but it's the amount of funky I could afford. Most books on upholstery say the only way they learned was by just taking stuff apart and learning from what was already in the chair. So to my couch and the people who originally upholstered it - I say thank you for the lesson.
Email Post
Labels: before and after budget cheap fabric piping reupholstery sewing Upholstery