Can of delight for today: Upholstering the tub chair

As I have stated in another post - the only way to get experience upholstering is just by doing it. I let my father know that I was interested in reupholstering furniture and if any of the friends of the family needed stuff done I could help them out. My father being the man he is - never let me down!  Neighbours from down the street needed a tub chair and a lazyboy recovered. She bought some nice brown fabric for the tub chair and off I went to modernize it.  I haven't even started the lazyboy yet ( I will admit I am a bit intimidated by it...).
Some of the things they were interested in doing were losing some of the buttons on the chair as well as getting rid of the skirt to try and make it look more modern.  I accepted my mission and began my second upholstery journey. 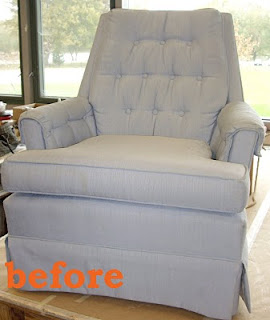 Taking apart this chair took me one hard long day in which my hands were so swollen afterward I couldn't fit my wedding ring on my finger anymore! It also took me two days to heal from so I would suggest perhaps doing the stripping of the chair with a partner or a team as it can be hard on the hands. This chair also had an exorbitant amount of staples. I feel like the original upholsterers may have had a bit too much whisky and thought the staples looked pretty as they glittered or something cause there were piles of them underneath the chair. It was also made in the Seventies, so that might explain it.
The most difficult part of this chair was the pillow backing, it was a complicated pattern, that I could not figure out, so although I knew I shouldn't have, I used the original fabric as the pattern. I took copious notes on how everything fit together because I didn't want to screw up their chair, as well as that this was such a complicated chair that I needed all the help I could give myself.  I originally didn't want to put the buttons on the back of the chair, but quickly realized the purpose of the buttons was to hug the pillow to the springs at the back it, so they were necessary. However the side buttons and the puffy side pillows on the arms, which I didn't like, had to go. I replaced some of the foam as it had deteriorated, and just stapled and shaped the front of the arms. Taking out the skirt was fairly easy. I just put piping on the bottom to give it a finished look then brought the fabric up and under the chair bottom. 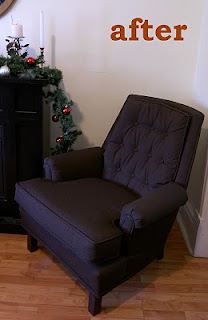 The other big difference with this chair was that I hand sewed most of it together. There are pieces that commercial upholsterers use to quicken the time it takes to upholter the chair called tack strips.There are varying types and sizes of tack strips and when I took this chair apart there were at least 8 strips of different types. Not only are these difficult to find for a non-professional upholsterer but they often look bulky on the furniture and I've heard that they are the first spot to show wear and tear so I just sewed these sections on by pinning and hand sewing. I was also told that the finer upholsterers all hand sew these types of areas anyways.
So this project, all told, took me about seven hard working eight hour days to finish.  I gave it to the neighbours just before Christmas and I hope it lasts them a long time.
Email Post
Labels: before and after buttons reupholstery sewing Upholstery