I am starting to think that I am getting to be one of those people who will proudly wear a shirt that says "I (heart) my Scotty" with a cheesy picture of a Scotty dog playing with ribbons, all pastel colours, eighties cut and awful - purely because there is a scotty dog on it. I actually screamed in a clothing store because I found Pajamas that had a scotty on them. I got those for christmas.
As I realize that I care probably too much for Peter, my young Scotty dog, I decided that in this wintry land of Canada, my dog needed more of a coat than he already has. Instead of forking over $15-$50! buckaroos on a dog coat, I decided to make my own. 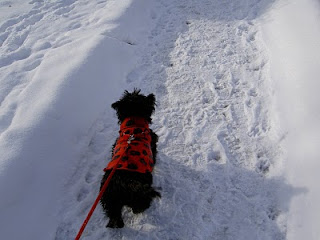 I began by going to a dollar store and buying a fleece blanket that was red with little dog paws all over it. (I know, it's just one more sign I am going to be a crazy dog lady eventually). I would actually suggest not going this route though, because it was a really small dog blanket and there was not enough fabric to do what I really wanted to.
I then measured his back length and around his belly to figure out how much of the blanket would actually go around him.  The fleece was kind of thin so I doubled it up by folding the blanket in half. My basic shape was a rectangle with rounded corners. I made one side more round than the other so as to give the back a nice shape.  Then I cut it out, sewed it together leaving a small section to pull it out through, sewed up that spot and did some decorative top stitching. When I put it on the dog, I thought it looked better if I flipped back one side almost like a collar, so I pinned it back and sewed it as well. I was orginally going to go with a velcro fastener but I didn't have any. What I had a LOT of was some thick black band elastic, so I measured and pinned the elastic on the coat with one band around his neck the other around his belly. I simply took that off the dog and sewed it all together and voila! A quick coat for my wittle precious puppy... oh man...I am doomed.
Email Post
Labels: coats dogs fabric fleece puppies Scotty dog sewing