I am sure many people think it a compliment when told they resemble a famous piece of sculpture. I discovered after having spent 3 hours being wrapped up in duck tape to make a dress form clothes judy, that I most resemble the famous 22 000 year old sculpture, "The Venus of Willendorf". It apparently was a symbol of fertility and the new spring.

(photo of "venus of willendorf" courtesy of wikipedia) 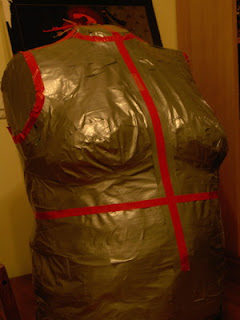 SO.. Why did I make this crazy thing of myself? I like to sew, and I like to make clothes for myself. I was never really able to try and make clothes by dressing on a judy because nothing was my size and I really wanted to try some draping techniques. I found that I could purchase a dress form for 300 bucks and it would still never be as big as I actually am. So after going to chapters and browsing through a craft book that was too expensive to purchase, I saw this idea of wrapping yourself in duct tape, then stuffing it and voila! ; a dress form that is exactly what you look like. Now I can make clothes that will fit me directly on a judy. I basically copied what they said to do in the book however, I didn't purchase the book so I made a bunch up as I went along.
To do this I started by putting on a crappy t-shirt, which I would then use as the base to put the duct tape on to.   My husband sat on a chair ( If you ever decide to do this, there is no shame... so find someone you trust, or someone you can laugh a lot with to do this with). He started by putting smaller pieces on me to deal with the curves.  Then I began to get bored so I just starting spinning around. Not a great idea. Dizziness will follow.  You will also get to a point where you can no longer bend over and peeing just won't happen until you are totally done. So don't drink too much while you do this. 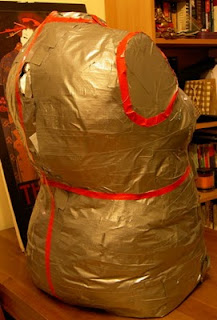 I put on about 4 layers of duct tape then we cut up the back of the shirt carefully not cutting me or my bra. Then I cut pieces of cereal boxes out to fill in the shoulder hole and base.  I then had to stuff the thing.  Though I knew I wasn't a small woman, I found it difficult to fill the space my body inhabited. I did have stuffing but it barely filled it and I didn't want to spend money on stuffing, so I just started crumpling up newspapers and filling the judy with them.  The only problem I discovered with the newspapers, is that they will, over time, lose their shape.  There are parts that are definitely pushed in now, that on my body stick out just fine (thank you very much).
Doing this - gave my husband one more good solid reason why his wife is crazy, but it was fun, funny, and useful. Well, sort of, I used the judy maybe three times, and then the back seam came undone.. so I think I will put the venus of willendorf out of her misery in the garbage.. However she was fun while she lasted.
Email Post
Labels: draping dress form duct tape ridiculousness sewing Venus of Willendorf