This past holiday season, my grandmother passed away. It has been incredibly sad in all respects as she was such a gracious woman, who was incredibly loved by so many people.  I did not get to see my grandmother as often as many of my cousins, as my family lived about an hour and a half away, but every Christmas we went and stayed with my Grandmother.  Her cooking was always exquisite (a trait in which my mother seemed to have been blessed with, but somehow skipped me), her wrapped candies were always out, and her tree was trimmed with some really amazing ornaments.  One year for Christmas she had knitted my sister and I sweaters during the grunge/nirvana phase of our adolescence when the big chunky decorative sweaters were in style. I remember thinking how awesome the sweaters were and I am pleased to say I still have and wear mine on really chilly nights. When I began to get interested in knitting myself, my mother gave me one of my grandmother's sets of knitting and darning needles. It was in a fabric case which was hand embroidered decoratively, which I imagine she had done herself. Inside of it were many needles, most of which I didn't know how to use or what they did, but I took them happily. 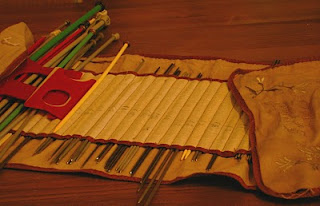 I look at them now that she has passed and get more than a little teary eyed.  They are bent, well used and well loved - evidence that she had made many things with those needles. She came from a generation where making your own clothing and knitting was an essential skill. Even when her own children were grown she kept knitting for her grand-children. She was also constantly knitting booties and little sweaters for babies that she would give to the Salvation Army. When I imagine my grandmother I see her with a set of knitting needles sitting on her lovely brown chair and her evil cat named 'Boogers' tucked in close by.  I loved my grandmother very much and I will miss her.  I hope that one day I can honour her by knitting something beautiful for someone that I love with these needles - just as she had done for me.
Email Post
Labels: christmas embroidery family grandmother knitting