Recently I have gotten my geek on.

Exhibit A : In the summer I went to a great little festival in Milton called Pirate Fest.  It was fun and silly and everybody got dressed up in pirate-type clothing.  There was lots of swashbuckling, drinking and singing irish / pirate tunes. At the festival they had a stand that had some really cool bracelets with some gears and wheels on it. They also had a pamphlet which talked about Steampunk.  I had heard of the Steampunk phenomenon before that but I didn't really know what it was or what it was all about.  After reading the pamphlet I thought that the idea of it was really cool.  I had read a lot of books that were set in Steampunk type worlds and thought that would be a fun, silly thing to get into. 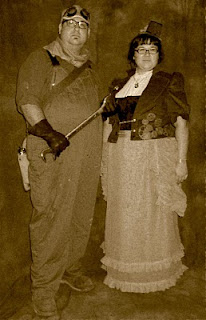 Exhibit B: Fan Expo. This is one of those things you don't need to do very often because it's crowded and silly and exhausting.  However it was also a place where they had some Steampunk Canada representation.  I had heard that lots of people get dressed up for Fan Expo so I took that opportunity to make myself a steampunk outfit.  I had lots of crazy ideas, most of which I couldn't pull off in two weeks and with very limited funds I was definitely limited by what I could get and do for very basically no money.  I had a ton of green fabric I was going to make into curtains for my outdoor arbour, but a tree fell on the arbour so I couldn't use it for that and it was sitting collecting dust.  So I decided to make a skirt and a bustle type thing for the bottom half of me out of that fabric.  I really just used a lot of rooshing. ( I do not know how to spell this word and it looks cool spelt this way.) Which is basically gathering fabric to create a roosh. (or a ruche?)  I had a corset already and a Victorian style blouse so I put that together but realized I needed something to really complete the look so I decided to make a jacket out of corduroy that I had for some other project. So I found a pattern that I had for making a jacket and changed it a little I gave the jacket a high collar, bigger shoulder puffs, and a shorter waist with a fanned tail back.  I also spent a lot of hours watching "Charmed" ( this should really be Exhibit C for my getting my geek on) and while watching I cut big and small gears out of that thin foam you can buy at the dollar store.  I painted them brass and a put a green and rusted patina on them to kind of bring together the colours from the skirt, then I sewed the gears onto the jacket. The next thing I did was put a chain across the front by tearing apart some ugly old necklaces that I never wore. 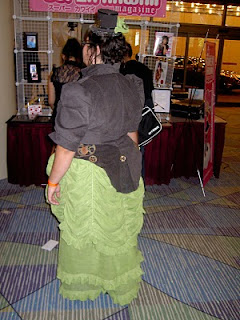 I had seen little hats on some of the steampunk ladies and figured I could make one pretty easily so  I took a large waterbottle cut out a tube from the middle then cut out a rim of the hat from a plastic plate and covered it in the corduroy. I then added gears and plates from a broken stop watch to decorate it.

Exhibit C: We spoke of this earlier - watching "Charmed" I watched 4 seasons of Charmed. Ridiculous. A bunch of bitchy witches running around playing with demons and warlocks. yikes.

Exhibit D: I am now a member of the Steampunk Canada Club because really if you have an opportunity to wear Victorian Garb and play with silly props, why not?

wow...I really am a geek but not nearly as bad as three quarters of the people at the fan expo.Don't get me wrong I feel proud of my mid-level geekdom, but I also take comfort in the fact that there are weirder, geekier people out there than me.
Email Post
Labels: sewing steampunk