My newest exploit has been one filled with holiday fun. In the summer, I was approached by a guy who hired me for my very first job I did out of university ( almost 7 years ago) and he said he had a friend who was looking for someone to build her a Santa Set for the Mall she managed in Milton.  I was interested as I kind of am one of those annoying people who love everything Christmas and do like to enjoy the season as much as possible (December I can't wait for you- my decorations are begging to get put up..). So I began a journey of whirlwind designing, drafting, building, budgeting and organizing for four very busy weeks.

The Concept is "Santa's Workshop" with a Victorian Twist. We wanted something a bit whimsical, a bit traditional and something with a fair bit of depth.  We came up with a Victorian Storefront filled with toys, a little door ( which I liked to think was a magic door that took Santa straight to the North Pole...) ( I know that sounds a bit crazy, but Christmas is fun!) We made the scale so that it was more interesting for kids, they can go in and try out the door, or just enjoy a building that is their height, instead of an adults.  I also added the swirly carved bits at the top to make it feel a bit whimsical and the toys were all found at Vintage stores, goodwill, Value Village and what not because to find toys that are older looking at new stores is very difficult - Everything is plastic nowadays. We also put together a lot of the wooden toys from kits.  Putting the toys into the windows was actually my very favourite part of the whole thing. It definitely brought out the little kid in me, as I was putting the toys in I was saying to myself "this doll should be kind of facing that doll, like they are about to have a conversation", or " I think this teddy bear looks a little lonely he should have a friend." I realize that I may sound crazy again but it's really easy to revert to your five year old self when dealing with Christmas stuff. 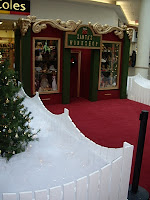 We then built platforms for the christmas trees and reindeer to stand on surrounding the workshop.  Then around the platforms we built picket fences that cordoned off the area and acted as a barrier between the mall visitors and the set.  Overall it was a lovely, hectic experience that I learned a lot from and really enjoyed. 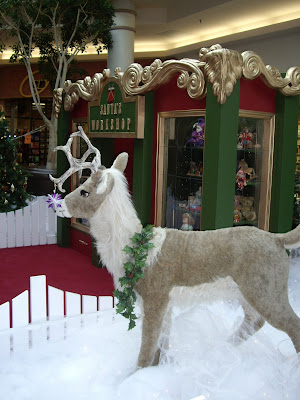 We didn't make the reindeer, the mall had it, I thought it was super cute though.
So if you want to get your picture taken with Santa, go to the Milton Mall!
Email Post
Labels: budget christmas Sculpture