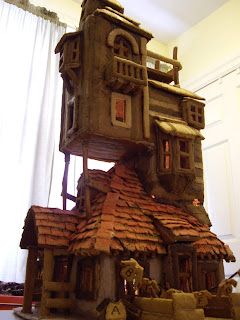 On this website that I frequent called www.craftster.org they host a yearly competition for Gingerbread houses and I thought I might partake in a little Gingerbread creation.  I have built a couple of gingerbread houses before, but nothing this elaborate.
I got the idea to do the Weasley's home from Harry Potter, after I watched the newest movie in the Harry Potter franchise.  I love the Weasley's home or what is formally known as "The Burrows" . It's a crazy d-i-y house that has different windows and different doors and it's a bit ramshackle and there is magic all mixed with "muggle" stuff and it feels to me like a house full of love. 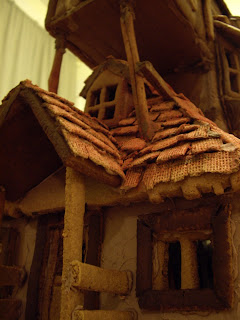 I began by sketching this to the scale I was going to build it, then making a model out of foamcore and tape. Each piece I made I used as a template for a gingerbread piece. I think there were over 200 pieces when all was said and done. I made 4 double batches of two different recipes of gingerbread ( for a little colour difference but also because I ran out of some of the ingredients so I had to get creative!!!). It was hard freaking work, my arms were sore, and my hands actually got a little swollen from kneading the dough with my hands. (Craziness)  I knew that the weight of the top would be an issue and much like the original the weight of most of it rested on two posts, so I had to use something stronger than gingerbread - so some hardy cinnamon sticks worked wonders! 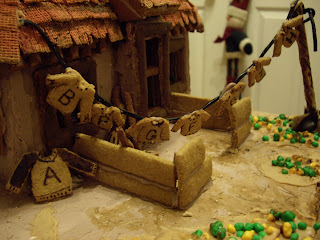 My favourite part of the whole thing was these little sweaters on a laundry line that I added.  I wanted to make something to reflect how much of an awesome D-I-Y-er Molly Weasley was by making all her kids monogrammed sweaters for Christmas.  So each one of them is a like a wee tiny Gingerbread cookie. I also made little brooms but they are harder to see. 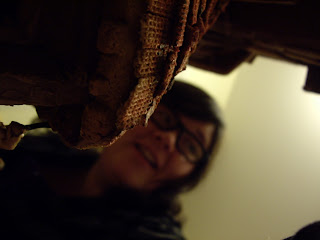 Over all this was a lot of fun, it took me about a week, and I just puttered away making it taller and taller crossing my fingers nothing would break. The crazy part is now I look at every building in the historic town of Stratford I live in and I think " How would I make that out of Gingerbread?".

I have also recently ( as in 2012 recently) done an instructable.com tutorial on how to build this in detail which you are welcome to peruse.

This has also been featured on a website called  Geek Crafts, trendhunter, Robot Libre,
Randomization,  which is kind of awesome.