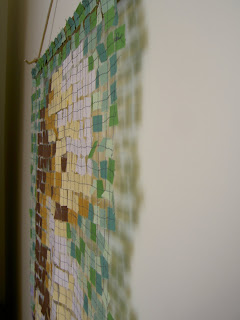 I have recently put a piece in to an art exhibition called "Goddess - the she within we"  at Gallery 96 in Stratford.  It is literally across the street from me in a factory that has been converted into studios, an art gallery and art class space. I had gone to the Toronto Design show and seen this amazing art quilt that was 15 feet high and 20 feet across with large squares barely attached together.  I really liked how fragile it was and wanted to try something using a similar technique. 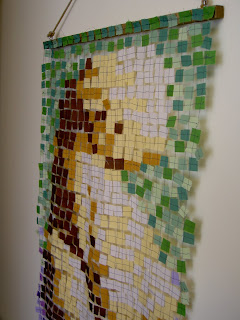 So I began to think about themes I wanted to explore and I had found that something that I am grappling with personally is my ability to make children or rather more importantly my inability to do so.  I am still going for tests and stuff so it isn't ruled out, but I have a lot of mixed feelings about it.  I found that the image of Venus of Willendorf was a perfect fit for me.  She was supposed to be a Goddess of Fertility, she was originally so small you could fit her in the palm of your hand. She was something that the nomads who worshipped her could take from place to place in their pocket or satchel.  (In one PBS special I watched about her, she was also likened to early pornography, but that doesn't have anything to do with my art piece.. just an interesting fact) As Fertility was so difficult in those times people praised the ability to have large child bearing hips, breasts that were full of milk to feed the children, and a healthy vulva ( sorry to be vulgar, but that is what she is all about) The irony really isn't lost on me that she is - to us- an obese woman.  My own obesity is one of the reasons I am having difficulty with my own fertility. 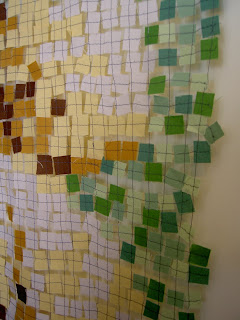 The other thing that I got me on to doing this project was the idea of a prayer quilt. As I began to work on it, not really knowing how exactly it was going to pan out I kept thinking about churches that do Prayer quilts. Usually it is for another person, so that they can feel the prayers of someone else when they use it to keep warm. I felt like this piece was a bit of a selfish prayer for myself in comparison to the original idea of the prayer quilt.  However the more I worked on it, the more a lot of different feelings began to come out and I realized that it was important that the piece didn't look perfect, that there were some places that were barely holding on, that were very loose because I too, feel that fragile.

So I entitled the piece "A loose Prayer" and that is why. 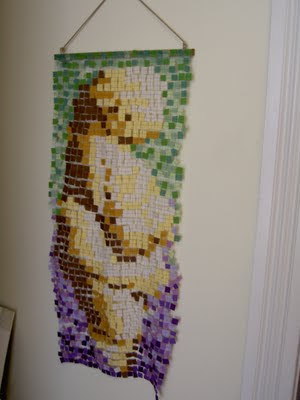