So as I have mentioned to some of you before, I have started to Craft swap.  If you don't know what that is - think of a pen pal that is personally picked for you and instead of writing to one another, we craft. Everything is based around a theme. So I have signed up for a couple of them and they are actually kind of interesting.  So the first one I did was about Alice in wonderland and these are things I made for my partner. 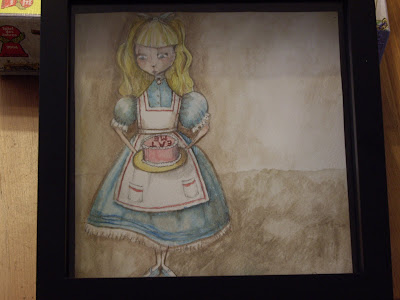 So this one is a watercolour I did of Alice contemplating eating the cake which says "eat me" on it. 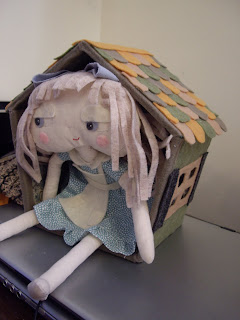 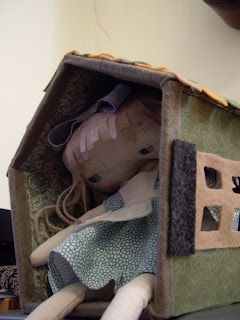 My partner had "wisted" this item.  I was new to wists before this but basically it's a website where you put images of stuff you like so that they kind of have an idea of your style? I guess that is the best way to look at it.. if you wanna look at mine it's www.wists.com/mezcraft .

So this craft I made for her is basically a doll Alice that is in a little felt house which is far too small for her. Clearly she has drunk something which makes her grow way too big. 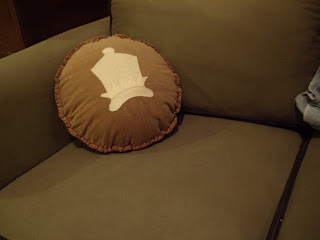 Then this pillow. So for those of you who have watched one of the creepiest versions of Alice in wonderland out there - the 1985 Alice with a bazillion stars from Broadway/Vaudeville in it and there are songs which are written for it. Anyways, Carol Channing plays the white queen ( from through the looking glass) and she sings this weird song whilst flailing arms and singing "Jam tomorrow, jam yesterday, but never ever jam today..." If you want to entertain yourself / creep yourself out watch it on youtube.. it's quite the number.
Email Post
Labels: Craftster.org painting Sculpture sewing