How many beads can you fit on the head of a greyhound? 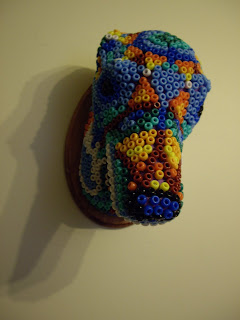 So as many people know I am doing these craft swaps through craftster.org and this month I endeavoured to do two at the same time - which actually ended up being three! But anyways... I am going to talk about the first one with you which was the day of the dead/ mexican Folk art swap. When I signed on to the swap I kind of had a mild curiosity with it but not much more. After I researched it I realized how amazing and how rich mexican folk art is... The thing I fell in love with most were these things called Yarn Paintings or bead paintings.  Traditionally it is yarn or beads pressed into a wax resin creating a mosaic like pattern to create all kinds of images that typically have to do with the Huichol culture in Mexico. They worship deer and peyote and the two are strongly connected the colours that they use are bright and vivid turqouise, blue, green, reds and yellows. Many of the paintings are done on a flat surface but a lot of them are three - dimensional and done on wood carvings.  I was determined to make something like this for my swap partner so I asked her what animals she was most connected with. She recently had a greyhound which she loved, pass away, so I thought it was befitting to use the greyhound as my base to bead patterns on to.  I don't have a lot of money and the beads were a little on the expensive side so I decided I would make my shape out of good ' ole aluminum foil and masking tape and felt. 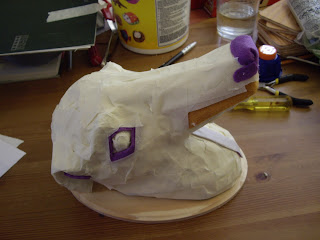 Once I had that done I papier mached the whole thing in my fancy purple paper.  I drew out some of the designs I wanted on the dog, but I mostly made it up as  I went along. 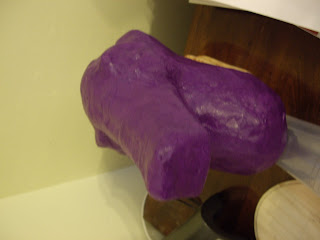 My Sculpture was not exactly symmetrical so some of the design ended up being quite assymetrical but  that seemed to be okay.  I didn't use wax resin to stick on the beads like the Huichol.. ( Though I did try an experiment with wax which failed hard.) I just used my handy dandy glue gun.  I then mounted the head onto a base and voila I had my Huichol Greyhound! 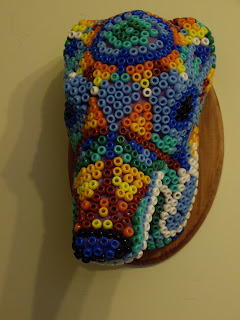 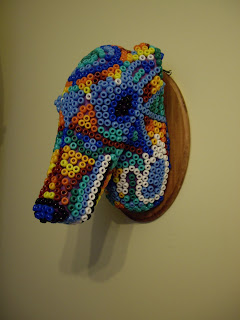