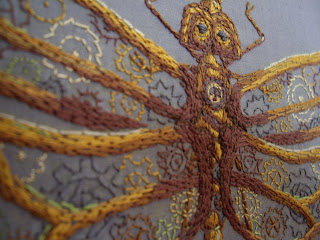 For a Hoopla Swap  I made a "Libellulah Vis Fumo" which is kind of my very loosely translated latin, meaning "Steam Powered Dragonfly". With the design I was trying to make it look like one of those old fashioned pictures with the butterfly displayed with pins on a board.  I drew it out kind of big and had to keep shrinking it down, and that is why I ended up doing such a big hoop (10") because any smaller and a lot of the tiny details might get lost.  I ended up taking a lot of the details out of the original drawing because I was crazy when I drew it that detailed.  crazy... 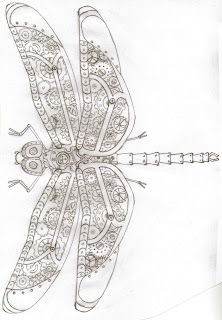 This was the first time I had employed the long and short satin stitch which sometimes worked well and then in some tighter spots my stitching got all fudgy, but I did feel I got better as I went. 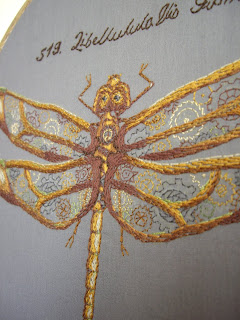 I did run into a problem though. I started the design with the some vintage thread I found at a thrift store. Not  thinking I was going to do very much with the thread, I then found I really needed to do more! So there is a lot variation of the colours which ended up being interesting but I will really have to think that out more next time! 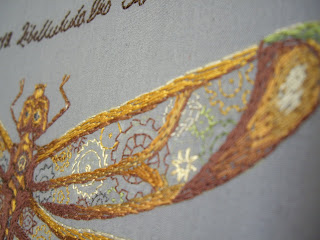 I realized that in order for the "gossamer clockwerk" wing to look lowered and more detailed, I had to use a single strand of thread, to do all of the gears.  Although this worked it also was much less forgiving so some of my "round" gears look less than round, but this was a wonky dragonfly anyway! 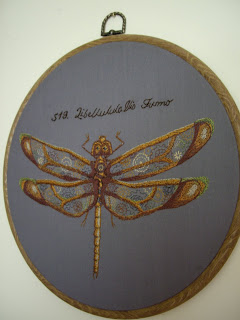 I am really enjoying doing embroidery. It is really relaxing and the more I do the better I get!