Day of the Dead on Halloween! 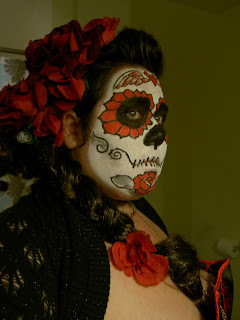 So here is my Halloween Costume for this year! I went as a catrina or what you might call  a "day of the dead lady".   I spent a long time researching the face makeup, there are a ton of sources on the internet for this.  I watched about 6 different videos and a lot of different pictures. This is what I came up with. I was most largely influenced by Sylvia Jii and by the photographs of 666 photography. 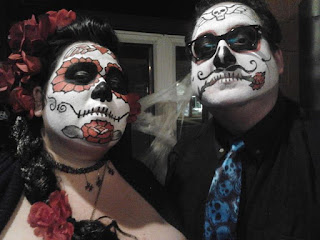 I also painted the hubby's face and he had the genious idea of being a romantic skull - What a casanova with a rose between his teeth! 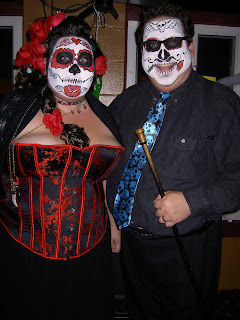 The Corset I bought for 30 bucks ( what a steal from UK Corsets!) and the skirt I got from goodwill for 6 bucks.  The Hair is probably what I spent the longest time on.  I have sort of long hair but not nearly enough to create this look so I went to the Dollar store and Ardene and bought 3 different hair claw hair extensions that were curly. I pinned them and one of them I braided.  I also made all of the flowers and there are several small sugar skulls throughout my  hair!

This was a blast although it took FOREVER to do the makeup on both me and Paul.  My arm was a little sore after awhile.. and we were a little late for the party! Oh well.. it was a good time!
Email Post
Labels: Day of the dead Dia de les Muertes makeup Mexican Folk Art skull