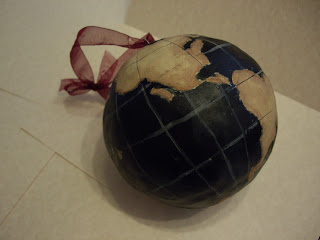 What a Steampunk Globe! See here, now this is a revisionist version of the world map... I seem to have forgotten Iceland, and there may be a couple of extra islands in and around Japan.  Woops?  I was trying to make a globe similar to this one from an amazing website called "Plasticland". However I lacked several key components - such as an accurate map. It's harder than you think to draw a globe from a flat version of the world!  I had fun with it though. I used a stryofoam ball and then covered it with my new favourite crafting supply - "apoxiesculpt". It's a two part molding epoxy that you can shape into any form you want, takes 3 hours to set ( that's loads of working time..) and it will harden crazy hard in 24 hours, it is then waterproof! It takes paint really well too. 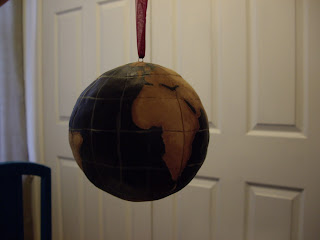