The "not cruel to animals at all" Trophy Rhino! 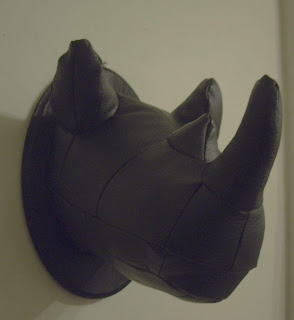 Behold! My Stuffed Rhino Head! I have seen a couple of really cute Trophy Rhino heads that are stuffed and "cutesy" online before and I thought I would give it a go.   I really liked the idea of making one similar to the little leather stools that are in the shape of rhinos but I didn't have the fabric or materials to do that, so I did this instead.  I also made one in different colours for a swap partner on craftster but this one I made just for me!
Unfortunately I didn't take any pictures of my pattern making process which was actually pretty cool. It felt a bit like cheating, but It worked out so well, I will probably do it again.  I had seen on a couple of websites and blogs a technique to cover a cheap toy with cellophane and then masking tape to make a pattern. ( This one here shows you how to do it to make mascots but I used the same principals) What you do is cover the part you want to make with the cellophane in a thin layer, then you put thin strips of masking tape all over it.  You then take a thin marker and mark out your pattern pieces, making the pieces so that any time there is a curve, you are creating a separate piece. I probably went a little overboard with how many parts I broke it down into but I think it added to the effect of the leather look. I then used  an exacto blade to cut the pieces off the rhino, then I laid them all out on a piece of cardstock, and photocopied them making them 300% percent larger than the original toy. 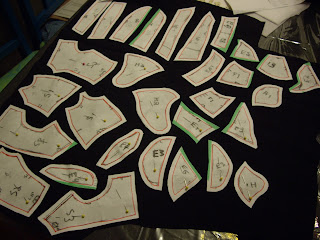 As you can see there are a LOT of pieces.  The website I had seen this on was for foam construction not necessarily fabric and sewing, so I had to add 1/4 seam allowance on all my pieces. I used a faux leather fabric that had a wonderful little bit of stretch that just gave me a bit more forgiveness! 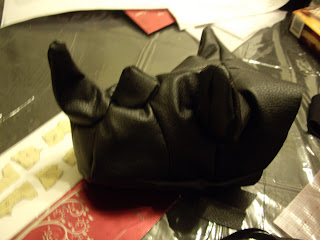 I sewed all the bits together which actually seemed to take no time at all.  Probably about an hour to get it all sewn. The toughest parts were around the horns and ears.  The ears ended up being about 6 pieces, so I ended up hand sewing them on because my sewing machine didn't like how thick that it was. 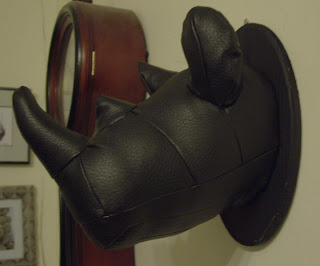 Then I stuffed it- gave it a carboard backing which I then glued to a dollar store plaque painted black and voila! A Stuffed Trophy Rhino Head without hurting a single rhino.  I also made a slight mistake when sewing that I didn't realize till I got him stuffed that gives him a slight lean to the left... but it actually looks really cool so I didn't change it.  I really liked this technique of making a pattern and although I kind of felt like I was stealing the shape from somebody else, I did change the pattern just enough that I don't feel too bad.
Email Post
Labels: Crafting Craftster.org plushie rhino Sculpture sewing