There is this HUGE trend on the internet to make art out of melted crayons, I think some of it is really cool, but I have heard it is crazy messy to do, so I decided to paint something that used a lot of colours in the same way , but I just didn't use crayons.. 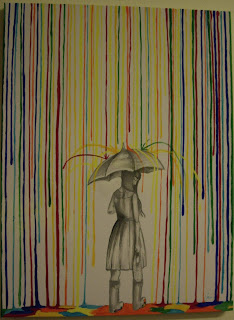 I recently participated in the November Pinterest Swap on Craftster and my partner really liked this painting - http://pinterest.com/pin/292990286/ which I also liked so I decided to do something akin to it. The point of this swap was to pick something from the online list pinterest site and remake it. I didn't want to do a straight copy of this piece. While I realize that my painting is still a derivative of hers, I wanted to make it my own.  Also I kept wondering why she was using an umbrella, but sitting on a step, which was weird cause then what's the point of having an umbrella if your bum is gonna get wet? I also was on a budget and don't have a lot of space to get messy, so I decided to paint this instead of using crayons.  Plus I know how to control paint, not so much with the crayons.

So I thought up of a new girl who was stuck in a grey world, but she was on her way to finding the colour.  She was smart and prepared with her rubber boots on in the rain, and toting her bag which in my mind was full of craft supplies! I wanted the rainbow to pool on the ground because I thought it made sense that the world would then change from grey to colour - All this smart young woman really has to do is walk into the rain to see the full colour spectrum.  No longer hiding behind her grey world and her grey umbrella.  In my mind this is the moment before she decides to do just that. 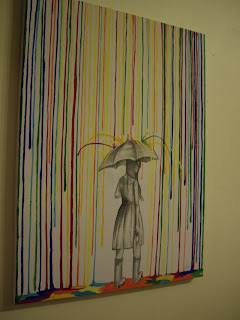