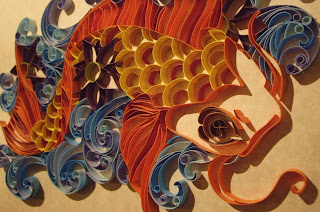 So here is my next Quilling adventure.. my Quiller Koi.  I looked at a lot of different koi tattoos for inspiration but this is an original drawing that I did, then I turned into a Quilled creation.  I wanted to try out some different techniques and found that making an image like this held it's own challenges.  I also tried several different kinds of glue.  My first adventures with quilling were these monograms, which I printed out on to paper with a faint grey colour. With this project, I used carbon paper to transfer the image as my scanner was on the fritz, but I found that it got really dark, so eventually I just went over everything with an eraser which took most of the carbon off, however, left just enough so I could tell where I wanted to put my quilling paper.

The great thing about quilling paper is that it really lends itself to organic shapes like waves or flowers, so a koi fish seemed totally fitting. 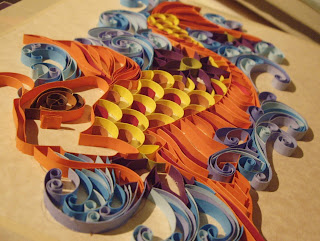 I tried several different glues as I have noticed that there is a wrinkle effect to your base paper when quilling.  I tried something called "zipdry" which is flammable, kind of sticky, and it dries shiny. However it does dry really fast, so if you are willing to put up with some shiny this glue is good if you want to work quickly, It also does not cause the paper to wrinkle. I also tried Mucilage glue, which wasn't better to use then regular pva or School Glue. So my conclusion is thus to solve the wrinkle problem: Treat your paper as you would watercolour paper and tape it down to a flat surface while you are doing it and while it is drying. A piece of board would be perfect for this, so you can move it around if you need to.  This doesn't allow for wrinkle because your paper has nowhere to go. You may still get some wrinkle but on a piece like this koi it would end up totally curled up if I didn't take any preventative measures. 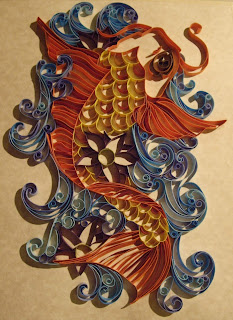 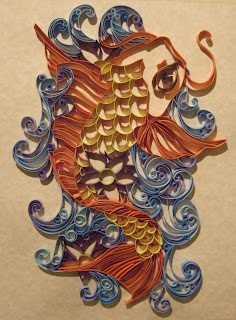 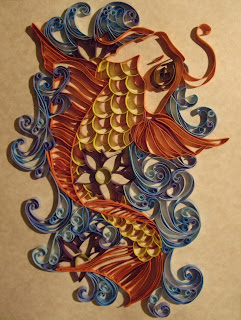 I wanted to show you all three of these pictures because one great thing about quilling is the photography of it. I am not going to claim that I am a mad photographer because I am not, but because of the height of the paper ( 1/4 inch if you are wondering) you can create some really neat shadows depending on where your light source is.
The different techniques I used in this process were slightly more complex than with the monograms.  To get the swirls which are outlined the entire way round I folded a piece of paper in half and then curled it. The other tricky part was doing the fins and tail. Basically these are pieces which have been slightly curved echoing the shape and repeating in several different tones of paper. The other really hard part was staying on my lines. There were a lot more factors involved with this piece. It helped to have the original drawing around so that I could measure what size the pieces would be from there and glue them onto my base paper. 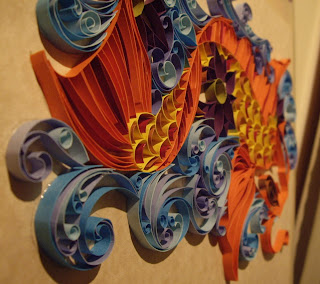 This was actually a ton of work and probably took me about 8 hours but I really like it and am happy with the way it turned out.  I now have to think up what I will do for my next quilled piece..
Email Post
Labels: koi paper craft quilling