Day 6 of the renovation! 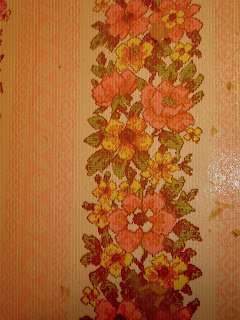 Well, it is now Day 6 of our renovation... Things are going really well. The Electrical took a little longer than expected and there are a lot more holes in my walls than there were before, however it's safer and updated so that is very good.  By fixing all the electrical though we added two more rooms to be painted as otherwise they would have big gaping holes in them -ugh... So the bathroom was one of them.

The above wallpaper ( sorry about the photos our camera is on the fritz..) was underneath a 1985-1990 renovation which was worse than this - it was kind of dusty rose and pale green splatters. eww... This wallpaper is bright pink, yellow, orange and brown. It was interesting- on first glance I totally hated it, but then I looked at all of the elements in that space and I thought, well, that actually all works well together for the time.  It's going to be painted over, but I can appreciate the previous owner's choice! 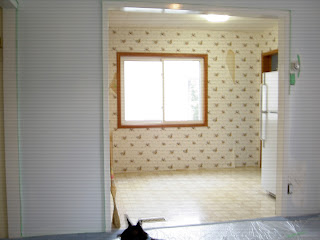 Here you can see the wallpaper in the kitchen and the archway of the living room/ dining room with it's first coat of paint on it. The paint colour is "wondering thoughts" from Home Hardware.  I think perhaps we should have chosen a colour called "focus" or "concentration" or "task oriented" but they would probably be ugly colours... hehehe. 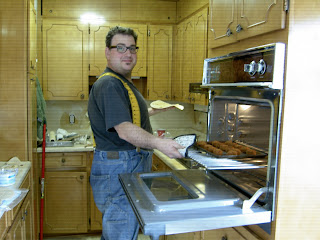 Here is the hubby using our 1960's kitchen, pretending to be a housewife. I really like having a stove that high, I don't have to worry about the dog sticking his nose into a hot oven. He can't even jump that high.

At first when we saw this kitchen I was reticent but it has really grown on me. It is really well made. It is stamped in all the drawers with "Hanover Kitchens" which is a local Cabinetry place.  I am really impressed with how it is constructed and how well it has held up. We have already moved most of our kitchen stuff in there and I can not believe how much space is left.  I am not used to the luxury of tons and tons of storage!

The backsplash had wallpaper on it that has now been removed. Unfortunately in both the bathroom and the kitchen they had wallpapered over unprimed gyprock which has meant a lot of plaster and sanding and probably two coats of primer.

This weekend we really did get so much done. It is really starting to feel like we actually have a house now!
Email Post
Labels: new house painting renovation wallpaper