I have been reading a lot from a website called retrorenovation.com, and their philosophy really makes sense to me.  It talks a lot about preserving some typically well made 50's and 60's kitchens and returning them to the state they began in. Mine is such a kitchen! However, I think I will probably still keep the things I love just throw in hints on the vintage! 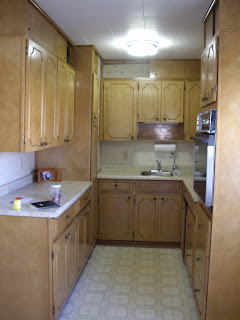 Here it is before we began doing anything. This kitchen was interesting. It clearly had gone through several remodels through the ages and quite a large one in the 80's. There were two different wallpapers on the walls and neither of them went with the floor. I was not a fan of the floral baskets which adorned most of the walls so it all came down. The Kitchen walls had been wallpapered over wall paper in some spots and overall we found three different types of wallpaper.  Underneath all the wallpaper we discovered un-primed gyprock paper. 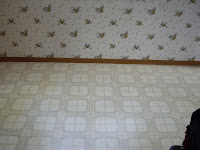 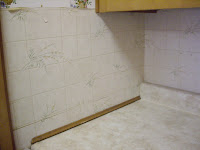 It was really tricky when trying to take off the wallpaper as it got confusing which was the wallpaper backing and which was the gyprock paper, however it all came off with the help of a few friends ( Thank-you guys!).  We then put up a TON of putty to try and even out the surface along with a lot of sanding. It took three days to get it to a point where we could prime the walls. 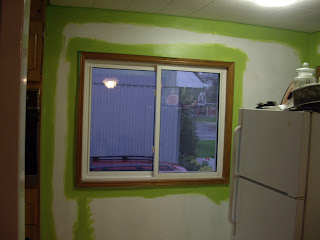 We chose kind of a crazy colour for our kitchen. I really liked this colour the minute I saw it and most people would say it is a bold choice, however, I think it goes really well with the kitchen and the style of the kitchen as well. It is called "Sweet Pea" and it is from Home Hardware. 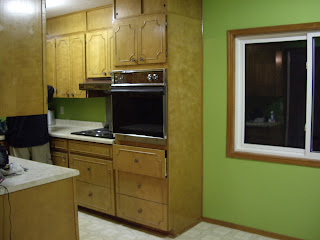 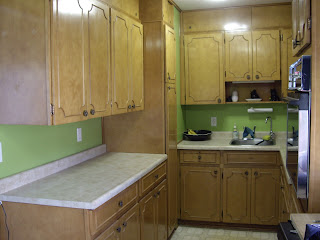 I can't say we did a lot to this kitchen except take down wallpaper and paint. We both loved the bones as crazy as that might seem to some who are used to massive white kitchens, so we really didn't want to change much. It is quaint and cute and is actually totally reasonable for two people who communicate well to work in ( the communicating well part is essential!) There were three people in there working for a bit and it was not good, so if we stick with two we will be fine. I really love this kitchen and can't wait to move in and finish dressing it all up with the things we have and get new funky things to adorn it!