With this most recent embroidery swap, I have been feeling really into the Zombie movies as of late( Walking Dead Season 2- awesome...), so when my partner listed this quote " Rule #2: Double-Tap." I thought I would use it. For those you who don't understand, it's from the movie Zombieland and its one of the main character's rules.  The rule really makes sense because how many Zombie movies have you seen where they kill the guy once but he comes back alive and they have to kill him twice? If you just kill him twice to begin with, you don't have to worry about them coming back alive! It's also kind of funny. So I decided to approach it in a kind of comic style way. 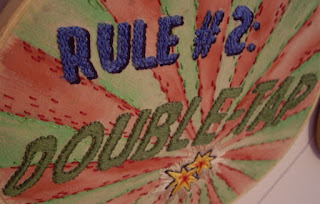 I used watercolour paints to get the red and green circus top pattern. I like using watercolours with embroidery better than acrylics because you can still sew through them really nicely without worrying about crunchy fabric.  However, it does mean that I can't wash it out afterwards. I know a lot of people do that because of iron on patterns but I just use sunlight and a window as a light box and trace my pattern once I have designed it. 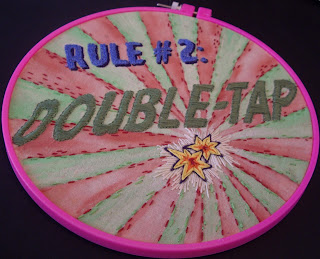 I do love searching for the perfect font and this time I used American Captain for "Rule # 2" and American Purpose Casual for "Double-Tap". I believe they both came from fontsquirrel.com which right now is my favourite font site.
Email Post
Labels: Craftster.org embroidery zombies