For a recent craftster swap, I made this piece of embroidery for someone who is a big fan of Simon Peg and Nick Frost movies. I did a lot of research over popcorn, discovering once again how funny these two are. After watching Hot fuzz and Shaun of the Dead I came up with one design, and executed it. Then I hated it and started over.. The second design I stuck with though! 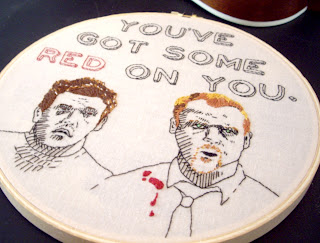 I chose to do it in a cross hatch style, although I wasn't totally satisfied with around the eyes as they look a bit racoonish,  I had a lot of fun of with this though. 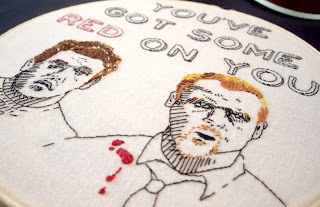 In the movie several people tell Shaun "You've got some red on you" in reference to at first a red pen that has leaked on his white shirt and then later when he is covered in Zombie Blood. This movie is so funny... 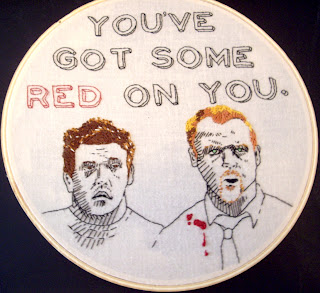 I also took a long time picking my font ( as always...) This one is called Neoretrodraw and is a free font. Hope you like it! I know my partner did which makes me super happy!