A polar bear trophy head.. Why Not? 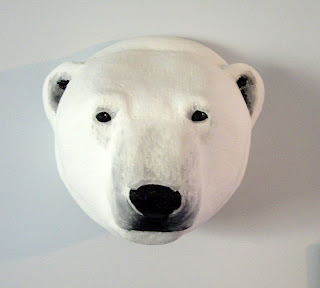 In the fall I took a sculpture course that was geared toward creating pieces with stryofoam and lost wax in order to eventually get a piece bronzed. I have previously shown the naked lady sculpture I did in that course, but the second weekend, I wanted to do something I could give my husband for christmas, so I carved a polar bear trophy head. Yep, Awesome christmas gift, because who doesn't want a massive polar bead head on a wall? I knew my hubby would like it because he is big fan of polar bears, so I used the techniques I learned and created it. 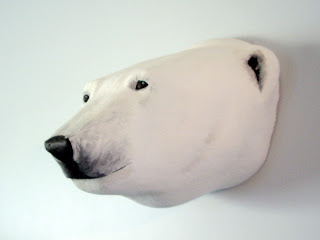 Instead of covering the piece in hot  wax to prepare it for a lost wax bronze sculpture technique, I covered it in several layers of plaster.  This probably wouldn't work for theatre, as things in theatre need to be sturdier than just plaster, however, I knew that just on our wall it would be fine. I covered it in plaster and used the plaster to get a little bit of a slick fur effect. 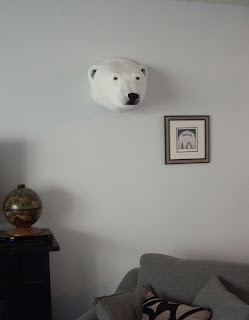 I then left it and went away to Suchitoto for two months and this week I finished it and put it up on our wall. Merry Christmas, babe! ( Just a little belated..)
Email Post
Labels: polar bears Sculpture